The Junior League of Lancaster, PA, Inc. (JLL) is pleased to announce this year’s winner of the 2019 Deborah P. Altman Outstanding Youth Volunteer Award: Charlotte Molitoris from Penn Manor High School. The high school senior received a $1,800 prize, of which $300 will be donated to Water Street Mission, Charlotte’s chosen charity.

Charlotte is a Gold Award recipient for the Girls Scouts of America, the highest award a Girl Scout can achieve. For her capstone project, she created a program called “What’s Next?” for juniors and seniors at Penn Manor who weren’t sure if college was the best path for them after high school graduation. She connected her peers with retired teachers so that the students could receive advice and feedback about options for their future.  Charlotte was also a National Delegate for the Girl Scouts and traveled to Columbus, OH with her fellow delegates from the Heart of PA to represent over 17,500 Girl Scouts across America.

Charlotte is the co-President for the International Thespian Group within Penn Manor theater, a volunteer cat cuddler at the Humane League and a member of the National Honor Society.

The award is named for Deborah P. Altman, past president of the Junior League of Lancaster, whose life exemplified a commitment to volunteering, a love of children and service to the community.  The purpose of the award is to recognize young people who demonstrate an exceptional interest and involvement in volunteerism as well as inspiring their peers to volunteer in their communities.  Since the award was established in 1984, over $42,000 has been awarded to outstanding youths in Lancaster County.

Learn more about joining the JLL, as well as its projects, awards and fundraisers, atwww.jllancaster.org. 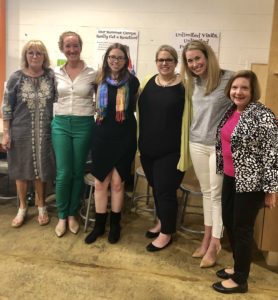